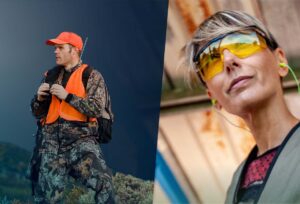 Back in March we took exception with Public Safety Canada’s use of images of a hunter and a target shooter on their page titled “Taking action to reduce gun violence”.[i]

Gang members and drug dealers – not Canadian hunters and target shooters – are responsible for violence committed with illegal guns in our major cities.

This fact is reflected by the ever-increasing number of criminals who are arrested for violating their Firearm Prohibition Orders each year.[ii]

Someone at Public Safety heard us and replaced the two images of responsible firearms owners with a generic image of flashing police lights.

While we’re grateful they took down the photos, using images of gang members or drug dealers (the two groups causing 99% of violence with illegal firearms) would more accurately reflect the problem the government supposedly wants to stop.

One sharp-eyed gun owner pointed out that the image of a couple hunting shown below the heading “Gun laws and enforcement” are Serbians, not Canadians, according to the stock photo website Getty Images.[iii]

One can only assume the Public Safety web techs could not find a single stock photo of gang members or drug dealers.

Or maybe they’re too focused on eradicating law-abiding Canadian hunters and gun owners from the landscape to care.