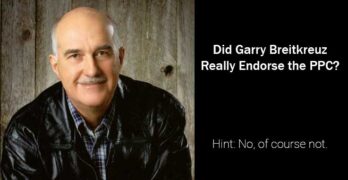 Did former Conservative Member of Parliament and current CSSA Board Member Garry Breitkreuz agree to have a photograph taken with Braden Robertson, his former campaign sign manager and current PPC candidate? Yes, he did. Did he agree to endorse the PPC, as Maxime Bernier claims? No, not by a long shot. “I don’t want people to think that I am somehow advocating that they vote for another … END_OF_DOCUMENT_TOKEN_TO_BE_REPLACED