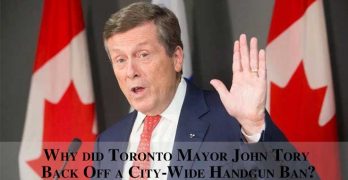 In a surprise announcement this week, Toronto Mayor John Tory walked back his long-standing position of a city-wide handgun ban. “Our police services have been clear that the vast majority of guns being seized are illegal guns from the U.S.,” Tory wrote on Twitter.[i] It’s refreshing to hear Tory admit illegal guns from the U.S. are the problem. This tacit admission that the Liberal … END_OF_DOCUMENT_TOKEN_TO_BE_REPLACED