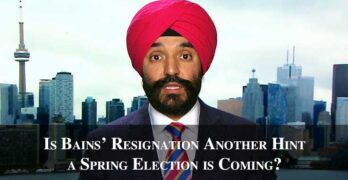 [Version Française] The Trudeau government won’t go to the polls for another three years unless they can manufacture a crisis to “force” them into one while blaming it on Erin O'Toole and the Conservative Party. So why would Navdeep Bains, now the former Minister of Innovation, Science and Industry, resign his Cabinet post and announce he will not run for re-election now?[i] Because a Spring … END_OF_DOCUMENT_TOKEN_TO_BE_REPLACED