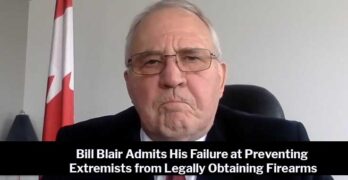 [Version Française]   “I tell you… not every person who’s in the gun lobby is an extremist, but everybody who’s extremist is in the gun lobby,” Public Safety Minister Bill Blair said during a Liberal Party panel event. ( at 21:00 minutes in) In the full light of the camera's gaze, Blair admitted that Justin Trudeau’s Liberal government knowingly and routinely grant extremists firearm licenses so … END_OF_DOCUMENT_TOKEN_TO_BE_REPLACED