This time of year we are treated to the spectre of ghosts, goblins, zombies, trolls and a myriad of strange creatures, some of which come from Ottawa to confound and haunt our darkest nightmares.

The night abounds with talismans – inanimate objects or artifacts believed to produce magical or miraculous effects. Witness Carl Kolchak’s silver cross fending off vampires in The Night Stalker, silver bullets to terminate werewolves, cloves of garlic in our doorways and amulets to ward off the “evil eye.”

These purportedly offer salvation from the fearful things that go bump in the night.

Well, sort of. In our modern society, the purveyors of ultimate spin, Hollywood and the Great Ministry of Truth (the CBC) have turned the dread of a talisman into a religious fervour, a cult if you will.

All types are included although some take a special place in the pantheon of evil. For example, the practitioners of this unholy faith tremble at the common rifle or shotgun, claiming it to be the tool of suicides. Indeed, the mere presence of one in your home starts the evil spirits chanting. Despite the fact that ropes far outnumber firearms in suicides, the high priests and priestesses have decreed that the most common of firearms create this terror.

Witness the tactical rifles and shotguns. Our political overlords declare the destiny of these firearms to wipe out huge numbers of humans simply because the talisman imbues the evil spirits of slaughter and mayhem into the hearts of ordinary men (but not women, just men).

And special mention goes to the ubiquitous AR-15, the Beelzebub of all guns.

Then there is the handgun, the true talisman of hysteria. Just the mere touch of this talisman turns men (again) into raging monsters, killing, plundering and raping with uncontrollable evil. Even relatively sane people declare, “I could never trust myself with one of those.”

So how do the purveyors of this sick fantasy attempt to deal with the hideous urges these talismans imbue simple folk with?

Enter the voodoo doll. Like the talisman, the voodoo doll is distinctly emotional. A concoction designed to scare away the bogeymen who terrify mortals in the dark. 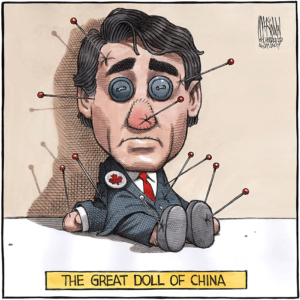 The voodoo doll is a crude figure representing a hated person into which pins are inserted to harm those with whom we disagree. If we can just stab the ugly little thing with enough pins, the demons we so desperately want exercised will leave us alone.

Like the talisman and its magical, mythical salvation, the voodoo doll is nothing more than a symbol upon which the believers in talismans vent their fear and rage. And like the original practitioners of voodoo, this is not benign – they mean real harm to the people these dolls represent.

Thankfully, the voodoo doll’s power exists only in the deep, dark, terrified recesses of believers’ minds – that place where they cower in terror.

But no matter how much hatred is channelled towards the voodoo doll, the hatred fails to accomplish the goal of removing the evil talismans from the nightmares of the plagued.

Enter the holiest of Talismans.

Gun bans are the talisman of politicians; the ethereal salvation peddled to the chattering classes and Hollywood glitterati alike.

Like all talismans, gun bans are a useless shiny object waved by Ottawa’s golems and ghouls who promise us – time and time again – that the next talisman will finally and definitively ward off the evil spirits and demons the antis fear.

The soulless wraiths who work for the Canada Revenue Agency may very well be real, but the Gun Ban Talisman of the shallow left is little more than a fantasy story we tell our children on Halloween. The Gun Ban Talisman has no strength or ability to change the evil deeds of lawless humans. It certainly can’t take away the demons we fear or hide the innocent from evil as precious daylight fades.

Evil humans are real. Talismans and voodoo dolls are not.

We know the spooky story is not real either, even if the gullible are still willing to believe.

The Gun Ban Talisman has no power, but disingenuous politicians pretend it does to curry votes from the simple fools that believe. They promise – this time – the useless but wonderfully shiny object will keep us safe from the monsters shooting up our cities, streets and towns with their all-too-real bullets fired from their all-too-easily smuggled illegal guns.

The mythical Gun Ban Talisman is nothing but paper utterly ignored by those we fear most.

So as the antis stab more pins into the gun-owner voodoo dolls, they believe the vampires, werewolves and monsters will fade away; the ultimate power of their make-believe talisman.

Meanwhile, back in reality land, people need to muster the courage to stand against the darkness – a quality far too lacking in Ottawa’s pandering golems and ghouls.

So long as Canadians ignore reality, so long as they are willing to pretend talismans and voodoo dolls can save us, the violence plaguing our cities, streets and towns will not end.

Have a safe and happy Halloween!