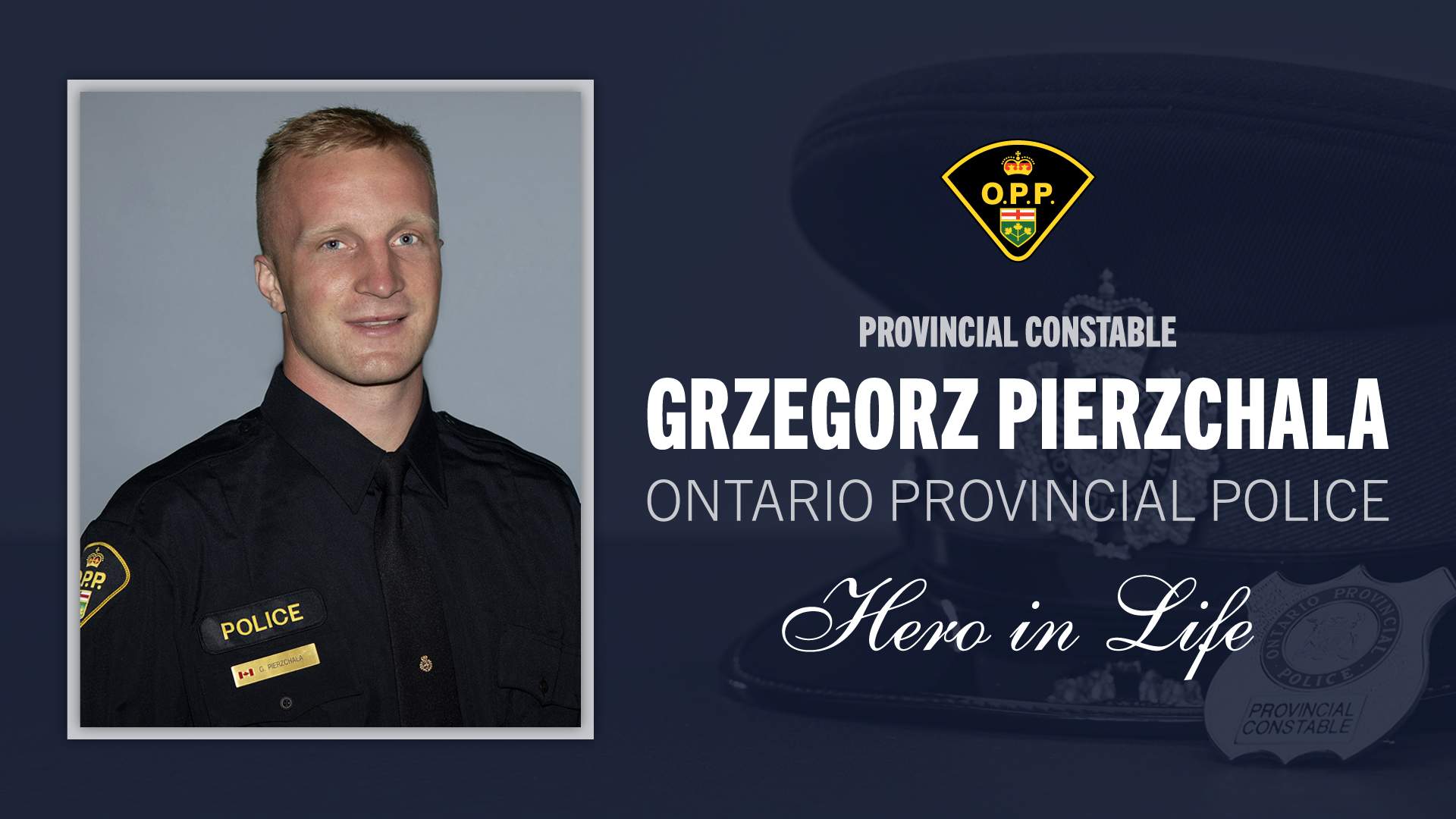 “Needless to say, the murder of Const. Greg Pierzchala was preventable,” said OPP Commissioner Thomas Carrique. “This should have never happened. Something needs to change. Our police officers, your police officers, my police officers, the public deserve to be safeguarded against violent offenders who are charged with firearms-related offences.”

“Our police community is currently in the process of mourning the loss of a young officer and preparing to honour his life and sacrifice,” wrote Chief Nishan Duraiappah, President, Ontario Association of Chiefs of Police. [i]

“At the appropriate time, we will be proposing specific legislative amendments related to firearms and violent crimes with a view to working with government and other justice partners to make our communities safer.”

“The tragic deaths of several police officers,” said a statement from the Canadian Association of Chiefs of Police (CACP),[ii] “as well as the harm inflicted on numerous other Canadians in recent months are a stark reminder that we now need to increase our focus on the issue of violent and repeat offenders as well as the bail process.”

Unfortunately for Constable Pierzchala and his family, the Trudeau government has no desire to lock up violent, repeat offenders or make bail harder for them to receive, as proven by Trudeau’s so-called “reform” of the justice system.

Not the First Murderer Set Free

Saskatchewan mass murderer Myles Brandon Sanderson, who stabbed 12 people to death and injured 18 others in September 2022[iii], was similarly released despite the mountain of evidence of his violent past and “concerns” by the Parole Board of Canada.[iv]

The blood of those 12 Saskatchewan murder victims, as well as the blood of Constable Grzegorz Pierzchala, is on Justin Trudeau’s hands and his recent platitudes to the Pierzchala family will not wash it off.

This policy will not change until Canadians elect a Pierre Poilievre government so that violent repeat offenders, such as those with multiple Firearm Prohibition Orders against them, cannot walk out of jail and harm more innocent people.

We know, as do all Canadians willing to look beyond Trudeau latest round of platitudes, that public safety is not enhanced by ignoring violent criminals, their smuggled illegal handguns and releasing them almost immediately on bail.

Yet that is precisely what Justin Trudeau’s government accomplished with its so-called “reform” of the justice system.

It’s widely known that Justin Trudeau insists on “cracking down” on federally-licensed, RCMP-vetted firearm owners and confiscating their legally-possessed firearms.

What’s less widely known is that Justin Trudeau’s government already lowered criminal penalties for a vast array of firearms offences and other violent crimes through Bill C-75, and will lower them even more if Bill C-21 passes.

More innocent Canadians and faithful police officers will die at the hands of violent, repeat offenders who are totally ignored by this Trudeau government.

This deadly trend will continue until a Pierre Poilievre government reverses Trudeau’s murderous policy and replaces it with a policy that puts Canadians and the police officers who serve them above the interests of violent career criminals.

Bill C-75, which forces judges to release violent repeat offenders like McKenzie and Sanderson, “was met with an immediate, loud and visceral condemnation by criminal defence lawyers who called the bill an “utter and complete betrayal,” an erosion of procedural safeguards that “gravely misses the mark,” a “regressive blindside” and “worse than anything Harper ever did.”[vi]

Poilievre said he meets with police officers across the country who “tell me that they often have to re-arrest the same person in the same day.”[vii]

“These easy catch-and-release bail policies are found in Justin Trudeau’s Bill C-75 — a bill that makes it much easier to get bail,” Poilievre said. “Even in cases of repeat violent offenders and even in cases where the allegations against the newly-arrested offender are serious and dangerous to the public.”

Public Safety Minister Marco Mendicino said the objective of Bill C-75 is to “off-ramp non-violent offenders so that we can put the appropriate and sufficient resources and energy into prosecuting and bringing violent offenders to justice.”[viii]

Trudeau’s Liberal government’s objective is profoundly at odds with its murderous results, yet they steadfastly refuse to acknowledge their failure.[ix]

The Canadian Civil Liberties Association, one of many groups who opposed Bill C-75 at the time, said the Liberal government had the right goals, but used the wrong tools.

“We (and others) think a complete rewrite of the law of bail and pre-trial release is necessary.”[x]

Trudeau ignored almost all criticism of Bill C-75 and passed it virtually unchanged.

If prison overcrowding is the problem they claim they want to solve, releasing violent, repeat offenders like Randall McKenzie must never be the solution.

Yet neither Trudeau nor any member of his government will admit that their failed policy for violent, repeat offenders like Randall McKenzie and Myles Brandon Sanderson is even an issue.

They simply offer up another round of bafflegab about how they’re “taking action by getting assault weapons off the streets” and “investing in our police” yet they never, ever take responsibility for their failures.

“I’m outraged by the fact that McKenzie was out on bail and had the opportunity to take the life of an innocent officer,” said OPP Commissioner Thomas Carrique.[xi]