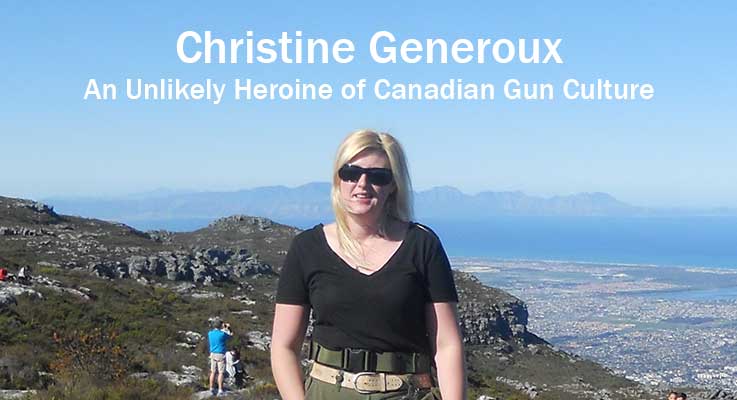 Christine Generoux, a 33-year-old woman from Ottawa, Ontario, is challenging the Liberal government’s May 1st gun ban by Order in Council. Unlike other litigants, Christine chose to represent herself in her Judicial Review of the OIC.

The Department of Justice agrees.

“Unfortunately, as litigation is both timely and expensive, only the richest in society can afford to utilize this final resort without a litigation-support program such as the CCP (Court Challenges Program). Indeed, without the program, Canada’s most vulnerable groups will continue to be left out in the cold.”[i]

Christine Generoux is one of Canadian gun culture’s most ardent defenders, but it wasn’t always this way.

Like many Canadians, Christine’s early life was ‘deeply troubled.’

She dropped out of high school when she was just 14 years old. She ran away from home in a failed attempt to discover where she fit in.

Low self-esteem meant Christine did not respect herself or, as a result, anyone else. She had little faith in herself and even less in others. Like so many troubled youths, these gaping holes in her life led to a lack of respect for authority and contributed to negative interactions with police.

Despite her trouble as a youth, Christine has always involved herself in community building and charity work, including famine relief fundraising, volunteering at cystic fibrosis events and heart health events and later, volunteering in long term care homes.

Her maternal grandfather fled the atrocities being committed in Holland during World War II and came to Canada in search of a better life.

Her paternal ancestors fled ethnic and religious cleansing in Lebanon and came to Canada, as did so many others during that era.

Samuel Generoux, Christine’s great-grandfather, was a hunter, trapper and guide in Algonquin Park in the late 1800s and early 1900s.

As a child, Christine and her family went on camping trips in the back country of Ontario’s Provincial Parks.

Christine’s life began to turn around when longtime family friend and Canadian gun culture stalwart John Perocchio took Christine out to the woods to shoot for the first time. He taught her how to handle firearms safely and helped Christine reconnect with the positive cultural elements from her childhood.

Many years later and as her interest in firearms and politics grew, John encouraged her to get her Possession and Acquisition Licence (PAL), which she did. He also sold Christine her first rifle.

“The rest is history,” she says.

She loved the sense of community, of belonging to our longstanding culture of safety, and the personal responsibility she learned through her firearms training gave her a sense of pride in accomplishment, elevated her self-esteem and gave her the inner peace she sought for so many years.

“I realized I wasn’t alone, that I was part of a community. By reconnecting with my cultural heritage I realized I do have value, that what I do matters, and those realizations allowed me to turn away from the self-destructive path I was on during my teenage years.”

From Grade 9 Drop-out to University Graduate

In seven short years, Christine Generoux transformed herself from a grade 9 drop-out to a Carleton University graduate.

Christine credits her supportive family, her best friend Joe, and the unwavering support of her mentors – longstanding members of Canada’s gun culture – for encouraging her and motivating her to take and pass her General Education Diploma (GED) test, a requirement for college entrance.

Today Christine has a diploma in Recreation & Leisure Studies from

“Earning my degree from Carleton University was the proudest accomplishment of my life,” she says.

“Earning my Possession and Acquisition Licence was the second proudest accomplishment of my life. I worked hard and sacrificed a lot to earn my diploma and for my PAL and I take the responsibilities of both extremely seriously.”

Life for Christine looks far different today than it did during those dark years in her teens. She is a respected and contributing member of society who works at a job she loves.

It’s also no coincidence that the core values she learned when she reconnected with her childhood mentors in the gun culture – personal responsibility, determination and tenacity – are the traits allowing her to stand alone and challenge the federal government.

One of Christine Generoux’s goals for the future is to create a Wilderness Survival Camp for troubled youth. She knows first-hand how connecting with the outdoors and learning the skills required to survive in the wilderness fostered her own self-esteem and turned her life around and she would love to give others that same opportunity.

“Another important goal is that, after we win this case, we must enshrine in Canadian law the right to own and use firearms in Canada so no future government can do this to us again,” Generoux said.

Christine earned her Restricted Possession and Acquisition Licence (RPAL) in February 2020 although she still hasn’t received her physical licence. COVID-related delays at the RCMP Canadian Firearms Centre are a well publicised and ongoing issue.

John Perocchio, her longtime mentor and a man she’s known since she was a child, was helping her build a custom AR-15 so she could enter precision rifle shooting competitions.

Part way through the build, her dream of competing ended when Justin Trudeau and Bill Blair introduced their May 1, 2020 gun ban by Order in Council.

In Christine Generoux – An Unlikely Heroine of Canadian Gun Culture, Part 2 we’ll take a dive deep into Christine Generoux’s Judicial Review and highlight how her approach is different from the others who are challenging the Liberal Government’s gun ban by Order in Council.

To learn more about Christine Generoux’s Notice of Constitutional Question and Judicial Review please read her court filings, listed below:

To support Christine Generoux’s efforts on all our behalf, please donate generously to her GoFundMe Page.